Why is your Ceremonial Cacao more expensive?

Most chocolate on the market today is cheap because the farmers and children are being forced to work for very little or no pay. Our farmers are paid above market price for their beans, and this helps to support the farming families directly as well as providing funding for health and educational community projects.

As consumers we have to be willing to pay a few extra dollars so that the Cacao Keepers and Indigenous communities may receive fair and sufficient prices for their beans.

We also give back by extending $1 from every Guatemalan cacao sale directly to the San Marcos, La Laguna community by supporting Familia UTZ Corazon –  a community project founded by the local people to provide food and housing in their community.

$1 from every Peruvian elixir sale goes to the Borderless Friendship Foundation that assists over 400 Hill Tribe children in Northern Thailand,  by providing safe housing, education, water and sanitation, sustainable farming and medical care to these children at risk of sex slavery and trafficking.

$3 from every Peruvian elixir sale goes towards my Mamma helpers here in Torbay, Western Australia, who chop and grind the cacao with me into the delicious elixirs you drink.

I’m sure you’ll agree that knowing no child is harmed and supporting families and mothers, is worth the extra price.

How can I help end child slavery?

If we are deeply committed to ensuring no child is harmed so that we can enjoy the pleasure and benefits of chocolate, then we have to be willing to put our dollars into ethical businesses, and withdraw our funds and energy from the giant corporations that are complicit and contributing to this abuse.

Here is a list of ethical chocolate companies committed to ensuring no child is harmed.

Slavefree chocolate is a great resource educating the public about the situation.

“In 2005, International Rights Advocates sued Nestlé and Cargill on behalf of six children trafficked from Mali to Cote D’Ivoire to forcibly harvest cocoa under dangerous conditions. Today, 16 years after the case was filed, the Supreme Court issued a heavily divided opinion with an unclear result in our child slavery case against Nestlé and Cargill under the Alien Tort Statute (ATS).

Nestlé and Cargill’s legal argument that they could freely use enslaved children to harvest cocoa sharply conflicts with their public claims that they are committed to ending their reliance on child labor. They—along with leading chocolate and cocoa companies including Mars, Hershey, Mondelēz, Olam, and Barry Callebaut—have repeatedly admitted that child labor is persistent in their cocoa supply chains, and acknowledge the problem is getting worse, not better”. Read the full article of the court case here.

Terry Collingsworth, International Rights Advocate says “The companies promised that by 2005 that they would stop using child labor. They were going to phase it out and figure out a way to change the system. Instead of doing that, they have given themselves three five year extensions of time. There was no consultation. They just said – well, we didn’t do it yet. Their latest is that by 2025 they will have phased out by 70 percent, their use of child labor. If you think about it, that is evil genius. It’s an admission that they are doing it and that they are going to continue doing it. There are some of the largest companies in the world that are saying they either can’t or won’t end their dependence on a system of production that relies upon child slavery.”

Since these huge corporations are refusing to be accountable and place childs rights before profits, it is up to us to take a stand. Every time you purchase our ceremonial cacao instead of cheap and unethical, highly processed chocolate, you are helping to liberate a child from the chains of slavery.

Is Cacao safe in pregnancy and breastfeeding?

Yes. I recommend smaller amounts of 15g 3x a week during the first trimester, up to 20g 4x a week in the second trimester and back down to 15g 3x week in the last trimester. Studies have shown an that mothers who consumed dark chocolate during pregnancy were less like to develop preeclampsia.

During the birth process is where Cacao seems to shine, and 20-30g can be a powerful ally for energising the birthing mother during exhausted phases of labour, and helping her to stay connected to her Spirit and Heart. Read my full blog article on cacao in pregnancy here.

Cacao has traditionally been used as a galactagogue (a medicine that increases breast milk production) in Central America. I drank cacao throughout the post-partum period of 3 of my pregnancies and had an abundance of breast milk to feed all 3 of my children. I highly recommend doses of 20g 3-4x a week, of the Nourish and Nurture Peruvian Elixir for breastfeeding mothers. This may help to support milk production and flow as well as nourish and sustain the Mother so she may freely give energy to her growing baby, without feeling depleted and exhausted.

* That being said, if your newborn breast-feeding babe is struggling to settle or sleep you may want to eliminate cacao for a week just to ensure that it is not too stimulating. Ultimately connect with your babe and your intuition to feel what amounts of cacao are suitable for you both.

Yes ceremonial cacao does contain very small amounts of caffeine, equivalent to about 0.1-0.7% per bean, which generally translates to about 1/4 of the amount of a cup of black tea. While caffeine is a central nervous system stimulant, the main constituent that gives Cacao its stimualting effect is Theobromine. Theobromine does not stimulate the central nervous system like caffeine does, instead it is a cardiovascular stimulant, which causes the blood vessels to open and dilate, and increases blood flow to our hearts and around our bodies. For that reason cacao literally does ‘open our hearts’.

If you are concerned about cacao being too stimulating for children, generally a smaller dose of 10g per child given no more than a few times a week, is suitable. It is a much healthier option than most of the sugary processed hot chocolates on the market today. Check out my simple cacao recipe for children here.

Cacao also increases anandamide, tryptophan, phenylethylamine and serotonin levels in our brains which can increase feelings of bliss and euphoria, elevate mood and improve focus and attention. It has a longer half-life than caffeine, meaning it takes longer for cacao to be metabolised by the body, so it lasts for 5-10 hours in our systems. Unlike caffeine which will give you a high followed by a crash in afew hours, theobromine has as more sustained gentle boost on energy and mood without the crash.

Cacao is the perfect alternative to coffee for all those wanting to boost their energy and vitality without burning out their adrenal glands. I highly recommend our Energise and Uplift Ceremonial Cacao blend as a great coffee alternative.

How much Cacao should I consume?

10-15g for children, pregnant women and sensitive people. Also for those on antidepressants and with heart conditions. You can also dilute the cacao with plant milk and maple syrup or coconut sugar to make it creamier, sweeter and more mild tasting for children. See my creamy cacao recipe for kids here.

42g is a ceremonial dose for deep meditation, and spiritual / journey work. This dose is not recommended daily.

Higher doses than this may lead to nausea or headaches so please listen to your body, and consume only as much as your intuition guides you. Consult your health practitioner for personalised health advice.

The more you drink her over time, the less you may find you need to consume to maintain a connection with her Spirit.

If you are super sensitive to cacao and find you are unable to consume her, Check our my connect with Spirit of Cacao Meditation here, so you may still receive her energetic medicine.

What if I am on anti-depressants?

Cacao contains MAOI (monoamine oxidase inhibitors), so it may interfere with some antidepressants and result in excess serotonin flooding your brain which can lead to migraines.

We generally recommend starting on lower doses around 15g and see how your body responds. Please consult with your health practitioner for personalised advice.

What if I have a heart condition?

Cacao directly increases the blood flow to your heart and increases your heart rate, so for those with heart conditions, or on heart medication we recommend starting with a low dose of 10-15g only a few times a week, and please consult your medical practitioner for personal advice.

Interestingly, there is growing evidence that unadulterated cacao (without milk and sugar and other additives) actually increases HDL cholesterol and lowers LDL cholesterol, which may reduce the risk of heart attacks and strokes. The polyphenols in cacao also reduce platelet aggregation and clot formation and reduce inflammation in the lining of blood vessels, resulting in improved cardiovascular health.

I also believe the energetic properties of cacao and her spiritual benefits can actually be incredibly healing for the heart. Having small doses, as well as sitting and meditating with her energy is a powerful way to receive her medicine.

Check out our Cacao Goddess who is a perfect addition for your altar and can support the opening of your heart as you sit with her and pray with her, and enjoy this regular practise of heart coherence to support heart and total body wellbeing.

How do I support my body before and after Cacao Ceremony

If your are planning on having a cacao ceremony either alone or with a group of people, there are a few basic recommendations to prime your body for a really positive experience.

Firstly it is important to listen to your body about what dose you will drink. While a ceremonial dose is 42g, some of us may not need all of that. Some of us may want more! If your body tells you to drink less, then honour that.

Before ceremony its good to fast for 2 hours prior. Drinking cacao on a full tummy can make you feel sick. Eating lightly during the day of ceremony on plant foods like vege sticks, dried fruit, nuts and roasted vegetables (like sweet potato) or warm vege curries are a great way to gently support your body.

To fully appreciate the subtle yet potent medicine of Mamma Cacao we recommend you dont drink alcohol, coffee or take any other drugs on the day of ceremony.

Cacao can dehydrate the body, so drink lots of water afterwards, and if you do find you feel nauseas then this can usually be settled by lemon water and green tea and a light meal.

Cacao takes 5-10 hours to metabolise so that means she can stay in your body for a long time. Going gently afterwards, resting, meditating or even sleeping and staying connected to the process will support you as the cacao continues to move around in the cells of your body. If you find cacao has energised you, then use that time to place that creative energy into heart led visions and projects.

Ultimately cacao invites us to journey into our own bodies, as she journeys through ours. She is embodiment medicine. So listen to your body, honour what it needs, and trust your intuition to tell you.

Please check the questions above if your are pregnant or on antidepressant and heart medication.

Is Cacao safe for animals?

No. Animals are unable to metabolise theobromine, resulting in poisoning. Please do not feed chocolate or cacao to your pets. Cacao offererings in nature may also entice wild animals to come and taste, so please do not leave chocolate or cacao in nature. Instead, offerings of fruit, corn, flowers, shells, water, and prayers are beautiful ways to give back to Mother Earth and all her creatures. 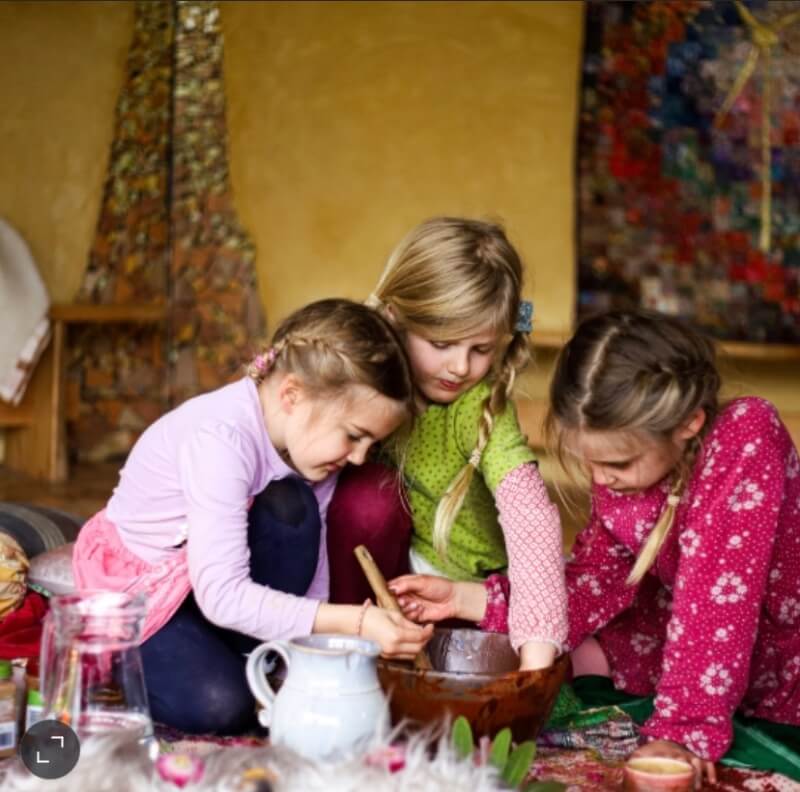 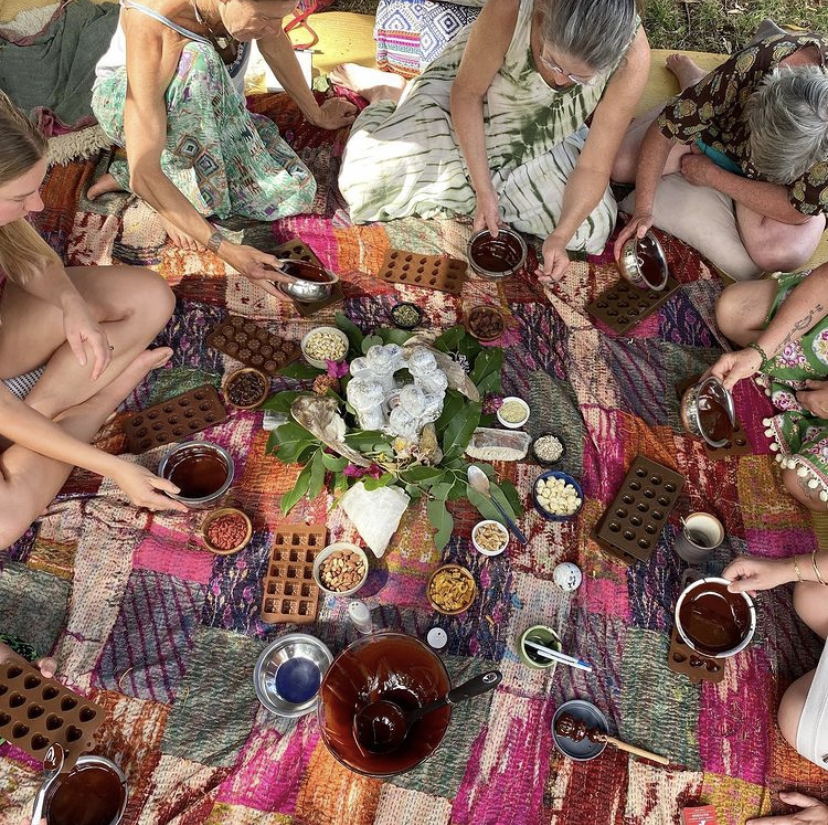